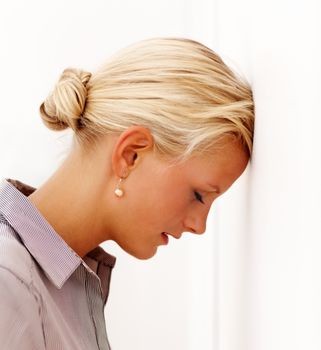 COLUMBUS, Ohio – Having difficulty getting pregnant can be an incredibly stressful experience for any couple. Now, for the first time, researchers have data that suggests preconception stress might play a role in infertility.

Extending and corroborating their earlier study conducted in the UK that demonstrated an association between high levels of stress and a reduced probability of pregnancy, this work adds new insight by suggesting that stress is associated with an increased risk of infertility. The study findings appear online in the journal Human Reproduction.
Courtney Denning-Johnson Lynch, director of reproductive epidemiology at The Ohio State University Wexner Medical Center, and colleagues found that women with high levels of alpha-amylase – a biological indicator of stress measured in saliva –  are 29 percent less likely to get pregnant each month and are more than twice as likely to meet the clinical definition of infertility (remaining not pregnant despite 12 months of regular unprotected intercourse), compared to women with low levels of this protein enzyme.
Researchers tracked 501 American women ages 18 to 40 years  who were free from known fertility problems and had just started trying to conceive, and followed them for 12 months or until they became pregnant as part of the Longitudinal Investigation of Fertility and the Environment (LIFE) Study. Saliva samples were collected from participants the morning following enrollment and again the morning following the first day of their first study-observed menstrual cycle. Specimens were available for 373 women and were measured for the presence of salivary alpha-amylase and cortisol, two biomarkers of stress.
“This is now the second study in which we have demonstrated that women with high levels of the stress biomarker salivary alpha-amylase have a lower probability of becoming pregnant, compared to women with low levels of this biomarker. For the first time, we’ve shown that this effect is potentially clinically meaningful, as it’s associated with a greater than two-fold increased risk of infertility among these women,” said Lynch, the principal investigator of the LIFE Study’s psychological stress protocol.
Lynch said results of this research should encourage women who are experiencing difficulty getting pregnant to consider managing their stress using stress reduction techniques such as yoga, meditation and mindfulness. However, she said that couples should not blame themselves if they are experiencing fertility problems, as stress is not the only or most important factor involved in a woman’s ability to get pregnant.
Germaine Buck Louis, director of the Division of Intramural Population Health Research of the Eunice Kennedy Shriver National Institute of Child Health and Human Development (NICHD) and the LIFE Study’s principal investigator, said, “Eliminating stressors before trying to become pregnant might shorten the time couples need to become pregnant in comparison to ignoring stress. The good news is that women most likely will know which stress reduction strategy works best for them, since a one-size-fits-all solution is not likely.”
This work was supported with intramural research funds from the Eunice Kennedy Shriver NICHD. Other collaborators included Dr. Rajeshwari Sundaram and José Maisog of the NICHD and Dr. Anne Sweeney of the Texas A&M Health Science Center.